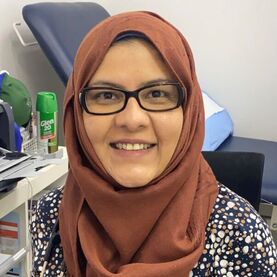 Dr Syed graduated with distinction from Dow Medical College (DMC) in 2000; DMC is one of the oldest public research university located in urban metropolitan area of Karachi, Pakistan.  After graduation, she completed internships at Civil Hospital Karachi, Pakistan (a 1,900-bed public hospital).  Dr Syed completed an internship in Internal medicine as well as Gynaecology & Obstetrics.  In 2001 Dr Syed moved to Kuwait where she was enrolled in Masters of Pathology program at Kuwait University. She Completed three semesters of MSC Pathology and then immigrated to Canada in 2002. Being inspired by her parents who were University professors in the UK and Pakistan, she started her teaching career as an Associate Professor at All Saints School of Medicine (ASUM) in 2006. She taught Pathology and Clinical medicine to 4th year medical students and helped them defining their medical career in the USA and Canada.

To pursue her clinical career, she passed Medical Council of Canada and the United States medical licensing exams.  During her stay in Canada, she also volunteered for psychological counselling of new immigrants and refugees in Canada. In 2008, she was employed by the United States Department of Defence as a psychological SME and was deployed to Iraq with the US Army.  In this role, being in charge of the psychological support program, she provided mental health support to Iraqi prisoners of war/detainees and helped reintegrating them back into the society. She also completed externships at the US Army Combat hospitals and volunteered for The American Red cross. Between 2009 - 2012, she worked at a Family Physician office in Canada and continued teaching at ASUM.

Dr Syed joined Murray Street Medical in May 2016, her special interests include mental health, women's health and chronic disease management. She works Monday – Friday (alternating Thursdays) and on a rotating roster for Saturdays.